This past week has been really exciting with the launch of feediary.com on the 24th of July and all the awesome feedback I got afterwards. In the official announcement I already wrote about what feediary is and why you should try it. In this article I would like to talk about the Why – Why did I build the RSS reader feediary? 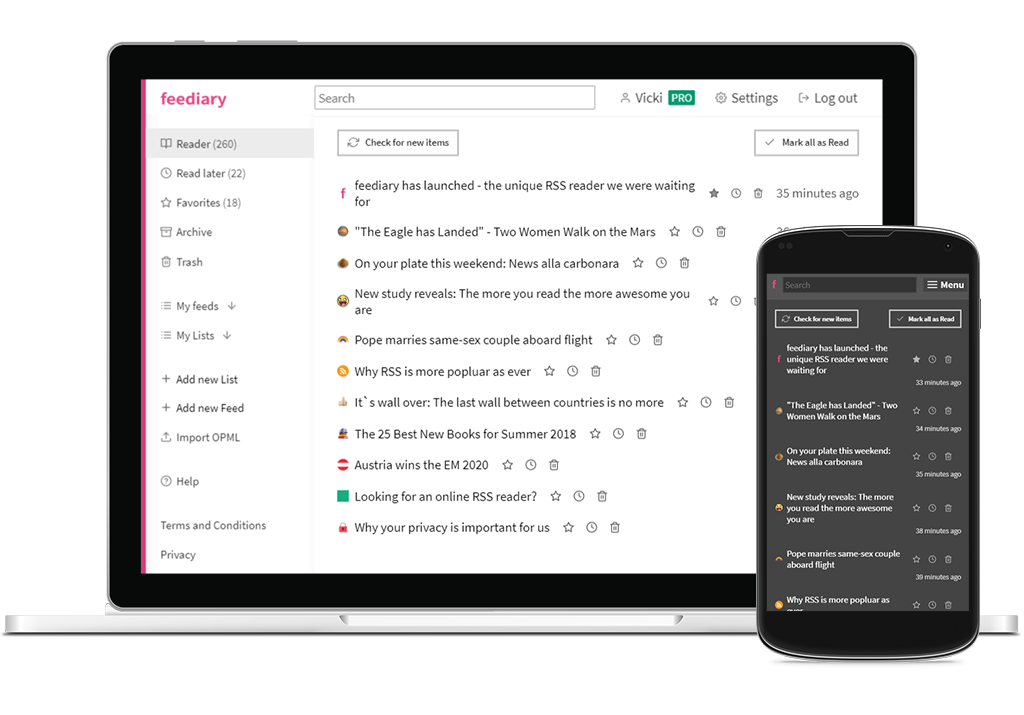 It all started in the middle of January 2018 – at this point I was not actively using an RSS reader and got most of the information through twitter. This mostly worked for me, but there were some problems: twitter doesn’t show feeds in chronological order anymore – which means I would often miss an interesting article. And a big issue for me, I was spending way too much time on twitter to keep up-to-date and do not miss anything. I knew I had to stop this and use it less. About at the same time people in my timeline started sharing their RSS feeds after a tweet from Laura Kalbag.

This was the perfect timing, and some days later I started working on a first prototype. Why was I not using one of the existing RSS reader you may ask now. I tried several at this time, but wasn’t really happy with any of them – some were clustered with ads, some didn’t care about my privacy, some were not really developed actively anymore and many required me to download an App for every OS I want to use it on or only worked on Desktop. So, that’s why I stared working on feediary. At first I developed it solely for me, but after some time I thought “Maybe this could be useful for many others”, and so I started again with version 0.1.

Over the next month I spent many hours beside my freelance jobs on it. I often reached a point where I wanted to give up, but after some days I always came back and started working on it again. You probably heard this before, but if you are stuck with a problem – stop trying to find a solution right away – I spend too many hours sitting there and trying to find a solution, only to find the solution in like 5 minutes the next day after a good sleep. Now, if I can’t get something to work in ~1hour I will switch to another task and come back to it the next day.

About 6 months after the first version, the site was finally ready for the public and with your support it will be here for a long time.

I will write about the technical backgrounds of feediary, the problems I faced along the way and other development stories in the future – now I need to go back and work on new features (something with offline I heard). If you want to keep up-to-date with feediary, why not subscribe to the RSS feed of our blog or follow @feediary on twitter.

I would like to thank my partner Johanna for all her great work and support, Laura for her help with the design, and Bryony for her help with copywriting. Without your fantastic work feediary would still be a prototype.

If you also 💜 RSS, do me the favour and try feediary and spread the word about it.